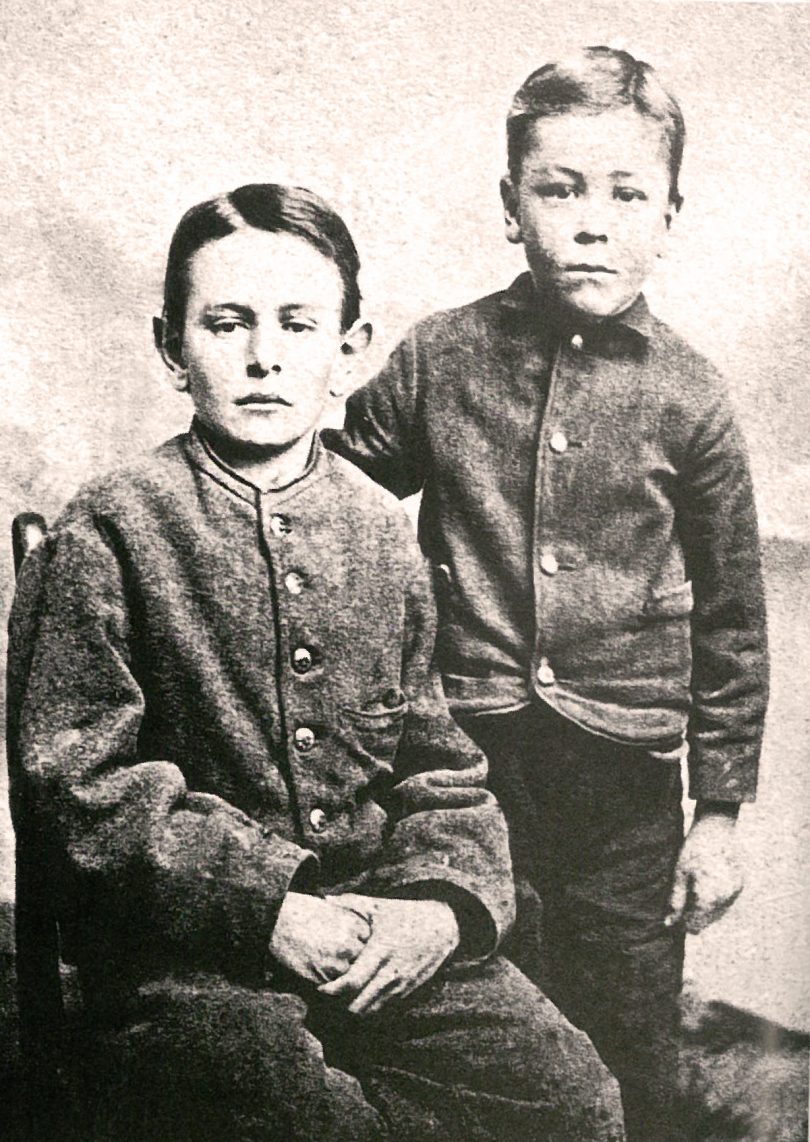 Eleven year old Herman Lehman had light hair and dark eyes. He strained to raise his head enough to try to make sense of his surroundings. The horse onto which he was tied and thrown across continued to gallop across the Texas plain. Herman squinted into the bright sun seeing nothing at all familiar around him. He winced as the pony brushed up against another mesquite and started a fresh trail of crimson down his already bloodied legs. Being thrown across the animal allowed him no opportunities to avoid the sharp thorns they passed by. His slender naked frame was blistered from the scorching desert sun and his stomach ached from the continual bouncing up against the horse’s back. As he limply laid his head back down, he wondered where the Apache raider with his eight year old brother Willie was and how long it would be before their dark captors would stop to rest. They had been riding fiercely for several hours since they were taken from the field near their home that morning, and the boy began to doubt that any rescue party could follow their ever-expanding trail.

It was May 1870, and western expansion had increased at a rapid pace in the early 19th Century while the Native American population feared for their freedom and safety. In response, some tribes acted with guerilla type warfare, which resulted in loss of life and many captured children such as the Lehman brothers.The Captured, a book by Scott Zesch, compiles the stories of several young German immigrant children in Texas who were taken captive by Native American tribes in these years.

Often these young children experienced the most gruesome and frightening circumstances of abduction. They typically saw family members savagely killed and infants brutally murdered by being bashed against stones. At night some could hear the sounds of women crying out as they were raped for days on the trail and then executed. As I read through their various accounts, the thing that took me most by surprise was the fact that the majority of these abductees did not flee their captors even when they had the chance. Some, even after being rescued by the Texas Rangers or by a tradesman who made a deal to buy them back, fled back to their captors much to the remorse and shock of their family members and Euro-American community. These young people became known as “White Indians.” Often they would even join the war on westward expansion – attacking or stealing from their former neighbors and friends.

Most of the captives in this area were children between the ages of seven and fourteen, and the majority of these were boys. Zesch cites the research of historian James Axtell in his book. “Axtell found that the children abducted by Indians in colonial America ‘took little time’, in some cases no more than six to nine months, to ‘fall in love with’ the natives and forget their past lives.”1 These children would be given Indian names and were adopted into a family in the tribe.

The question that lingers in one’s mind as they pass through these harrowing accounts is “Why?” What would make a child who had seen atrocities like their own family members being killed right in front of their impressionable eyes, decide to join the very perpetrators of these acts. Some might suggest Stockholm syndrome, but the author addresses this theory briefly in one chapter noting many differences between the two. Among these differences, he notes that these children did not seem to have the fear that the adults who experience Stockholm’s do. And unlike those who experience Stockholm’s, these captives not only acclimated into the culture of their abductors but were often life-long defenders of them.

Personality appears to play a part in their response, as well as the age at which they were taken and the length of time that they were held captive. One other interesting factor that played into the captive’s acceptance or rejection of their kidnapper’s lifestyle was religious beliefs. Of the cases mentioned by Zesch, the few children who did return to their families often held a deep-seated belief in God and, from what I could pick up from the information, seemed to have a personal relationship with Him beyond just being religious.2

But the strongest argument made for this strange unfaltering devotion for and acclimation into the ways of the native people is the time and care invested into these children by the Native Americans.

The families in this area of Texas were mostly German immigrants. They were busy, hard-working farmers for the most part. Fathers, who knew how to read, often were too busy to impart that knowledge to their children. Mothers were focused on the daily demands of frontier life and had little time to spend with their children. Accounts of these children and their siblings point to long and lonely days by themselves often out in fields watching animals or working in gardens. The general MO of this Texas community was “We work hard, long days and so must our children. This is the nature of our survival.” The parent-child emotional relationship was virtually non-existent in many families. In fact, unlike other communities or the tales of the well-known Ingall’s family, the parents in this area often did not take the time to even instruct their young tweens and teens in things like swimming, hunting, shooting, tracking, or horseback riding.3

Now imagine one of these young twelve-year old boys being taken into a tribe and being adopted by one of the men. Suddenly, his days are spent not alone but with hours of instruction from an adult. He is taught by his new father to mount a moving horse and to corral a group of wild ponies. He learns to wrestle, play war games, shoot a bow, and skin prey he has trapped. Days upon days are spent with this new family, and suddenly a relationship begins to spring forth. They are made to feel important as they are included in tribal meetings and stories of tribal lore are told them around the campfires in the evenings. What a different experience from the long and lonely childhood days at their former home!

These Native Americans followed a powerful Biblical mandate of parenting. Though unfamiliar with the teachings of the Bible, they followed the principle nonetheless.
“Train up a child in the way he should go, and when he is old, he will not depart from it.” Proverbs 22:6

In the case of these children, more importantly than their bodies, their young hearts were captured. The Native American people spent hours of their time teaching and investing in these young people. And as the proverb says, most of them did not depart from those ways even into adulthood when everyone from their past was trying to bring them back to the way of life that they had lived but never known.

And as I read, I thought: Who could blame those poor homesteaders? They were doing all they could to provide for their families, to protect them from the harsh elements of cold and hunger. And do we not often do the same? Can we not become so busy in doing what is necessary that our children’s hearts are left open to an outside invader? If we spend our days caring for their physical needs but not capturing their hearts then we have failed. In ministry, if we get so busy serving others that we don’t take the time to seek out the hearts of the very ones God has put directly in our care, we have failed. If we fill our schedules and theirs with so much activity that we are in a constant state of motion but not mentoring, then we will soon discover that someone else will snatch up those moments. And one day we will shake our heads in disbelief, wondering what happened, as our son or daughter “departs from the Way.”

I write these thoughts for my own meditation, as much as in the hopes that it might interest and perhaps challenge some other parent, grandparent, aunt or uncle out there. Josh and I are choosing to make the efforts by God’s grace to have real conversations with our kids, to do homework with them at times, to play silly games, to live real and honest lives with them not just in front of them. But this has to be intentional. It means saying “no” to others more often so that we can say “yes” to our families. It means determining to engage when we are exhausted and laughing when the jokes just aren’t that funny. It means sharing with them what God is doing in our lives and not just doling out a list of religious do’s and don’ts. The days are fleeting, and the list of responsibilities and needs around us never-ending, but most pressing are the three young hearts that beat under our roof…and that is a responsibility worth our greatest pursuit.